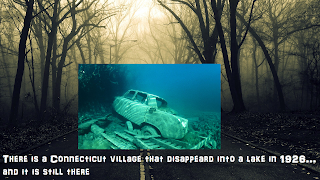 Most of you who have lived in Connecticut or New York most of your lives have most likely heard of Candlewood Lake located in Fairfield County... it is the largest inland body of water in the State of Connecticut with a shoreline over 60 miles long. But to many's surprise that lake hasn't always been here, in fact it didn't form until 1926 after the creation of Danbury's hydro-electric dam. When the dam was built the valley flooded submerging hundreds of acres of roads, farm equipment and foundations and even the entire farming village of Jerusalem... oh yeah and this includes the towns cemetery. Not to worry though, before the flooding of the valley CL&P paid workers a whomping $1.00 per body they dug up and removed. Today the roads, foundations, farming equipment and even a bridge (as seen in the video bellow) can still be found by scuba-divers today. 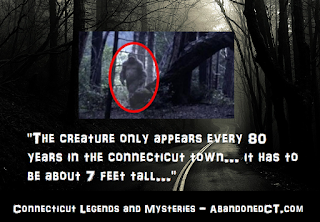 A hot summers day in the year 1895, local Riley Smith was picking berries in the small town of Colebrook, CT. Shortly after arriving he comes face to face with what he describes as a man "7 feet tall... covered in hair... with arms past his legs..." over the course of the next couple week multiple other reports came in from the area matching Riley's description. But then just like that the reports stopped... they stopped for an entire 80 years. The year is 1972 two men report to the Hartford Currant of seeing a  "strange man like creature covered in hair" standing upright by Crystal Lake Reservoir. Two years later two different couples reported fleeing after seeing a "creature covered in hair about 6 feet tall." at the Rugg Brook Reservoir. Police arrived on the scene to investigate finding no further evidence. To all the residents of the area please have your cameras ready... 2052 is right around the corner... 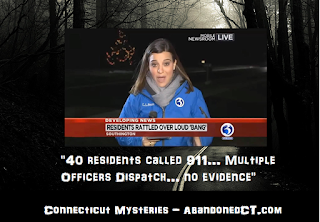 "It kind of went right through you..." one resident of the quit Connecticut town of Southington. Days after the start of a new year in 2017 over 40 residents called 911 reporting a "massive explosion". When multiple police officers responded to the area they found no evidence of damage, power outages, and no one reported even seeing a flash of light. Reports then started coming in from the surrounding town of Cheshire. Police reached out to the New Haven Earthquake Center only to find there was no reports of seismic activity at that time. Today the source of the mystery "boom" remains "unknown". 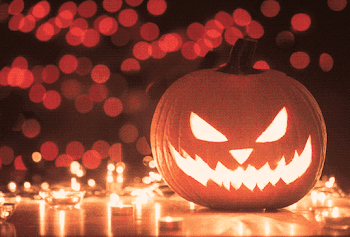